This election too was not different from the earlier one as the same account of laxity on part of GHMC is being discussed this time where people expressing their frustration over the tall claims of the civic body in dealing with issues like garbage collection and water supply. Old city – predominantly a densely populated area in the city and known for its tight grain housing system with wayward streets that take you out somewhere to nowhere, has earned the moniker of ‘most filthy area’ with streets filled with garbage and overflowing sewerage water.

Issues like garbage collection, heaps of garbage at every few meters, streets with overflowing sewerage, the supply of polluted water, and interrupted power supply are very common and faced by people regularly for several years. 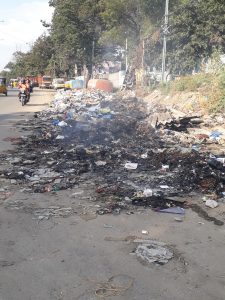 “You could witness garbage at every few meters in the area as there is no proper sanitation maintenance here. Several streets were filled with overflowing sewerage or murky water and GHMC officials didn’t give a hoot to the suffering of the people. Polluted water being supplied by the HMWS&SB is another issue that hunts the residents and adds woes to their problems,” said Mohd.Zarrar, a resident of Hussaini Alam.

“GHMC officials and staff don’t give a hoot to the grievances even after bringing them into their notices. People choose not to vote in favor of anyone and stay away in their house on polling day due to the sufferings they are smarting under here for several years. You could find Corruption at all levels in the GHMC as not a single work will be addressed without a favor,” rued Mohd.Mohsin a resident of Koka Ki Tatti, Hussaini Alam.

“Leave alone fulfilling election promises such as providing better amenities in every colony in the ward, we haven’t even got proper facilities like neat water to drink, regular garbage collection, sweeping of roads, attending complaints overflowing of sewerage in streets and freshwater for drinking,” he added.