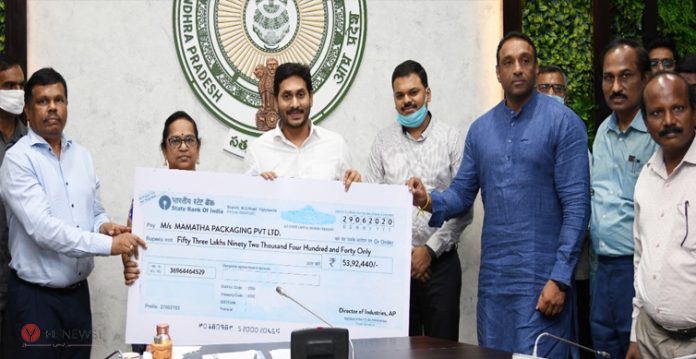 Amaravati: Andhra Pradesh Chief Minister YS Jagan Mohan Reddy has decided to clear the pending incentives that were piling since the previous Government regime. A total number of 97,428 units which includes around 10 Lakh employees in the state of Andhra Pradesh will benefit under this restart package. This comes during the times of COVID situation in the country where the micro Small & Medium Enterprises ( MSME) sector was the worst hit. As per the first installment Rs.450 crores were released during May and as of today, a sum of Rs.512.35 crores has been released in the second installment of the restarted package.

Apart from payment of all sanctioned and outstanding incentives to the MSMEs, the package includes a waiver of three months fixed/demand power charges of MSMEs, deferment of minimum power demand charges of large and mega units for three months and working capital loans for MSMEs along with preferential market access to them.

A sum of Rs 200 crore working capital funds has also been set up by the Government to provide loans in the range of Rs 2 lakh to Rs 10 lakh to the MSMEs. These loans will be given at a low-interest rate of six to eight percent and with a longer repayment period of three years.

The Chief Minister directed the district collectors that they should push and encourage the MSME sector people and the government will stand by them during their tough times. The CM also mentioned about Rs 1,000 crore dues associated with spinning mills will be paid over the next year.

Beneficiaries from different districts also interacted with the chief minister through video conference, praising the government’s initiative to helping the MSME sector. (NSS)