Free Covid vaccine to 18 plus age group from June 21: Modi 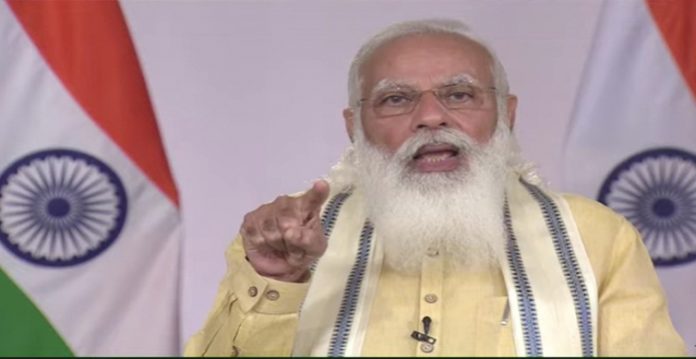 As the second wave of coronavirus has been indicating a declining trend in India for the last few days, Prime Minister Narendra Modi on Monday announced that all Indians above 18 years of age will be administered free Covid-19 vaccine from June 21.

Addressing the nation, the Prime Minister made it clear that the states will be provided these vaccine doses free of cost from the Central government.

“The government of India will provide free vaccine to the states from Monday, June 21, in every state for all citizens above the age of 18 years,” Modi said.

The Prime Minister said that the government of India itself will buy 75 percent of the total vaccine production from vaccine manufacturers and give it free to the state governments.

Modi also said that 25 percent of the vaccines being made in the country will be provided directly to the private sector hospitals while they will be able to charge a maximum service fee of Rs 150 for a single dose after the fixed price of the vaccine.

“The task of monitoring it will remain with the state governments,” the Prime Minister added.

“No state government of the country will have to spend anything on the vaccine,” Modi further announced.

Till now, the Prime Minister said crores of people of the country have got the free vaccine. “Now people of 18 years of age will also join it.”

“Only the Government of India will provide free vaccine to all the countrymen,” the Prime Minister reiterated.

It was decided on Monday that the government of India will also bear the responsibility of 25 percent of the work related to vaccination with the state governments, said the Prime Minister, adding “this arrangement will be implemented in the coming two weeks.”

“In these two weeks, the central and state governments will together make necessary preparations according to the new guidelines.”

also read: Over 300mn Covid vaccine shots administered in US

He also announced that the Covid-19 vaccine supply would increase in the country in the coming days and a trial for three more vaccines is going on.

“Due to the continuous efforts and hard work that the country has been doing for a long time, the supply of vaccine is going to increase even more in the coming days.

“Currently, seven companies are producing different types of vaccines in the country and the trial of three more vaccines is also going on an advanced stage,” the Prime Minister said.