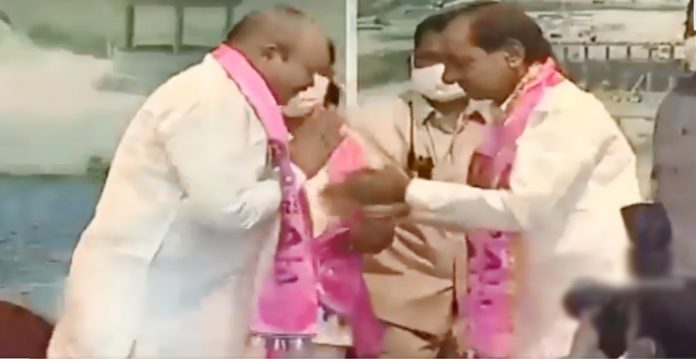 At the party office of Telangana Bhavan here, the TRS boss offered a pink shawl to Peddi Reddy and his followers and other leaders as a mark to join the ruling party.

Speaking on the occasion the TRS supremo stated that Peddi Reddy was his close friend and he is happy to invite him into the TRS party fold. He will get due recognition in the party and will lead the party ahead, KCR announced amid applause from the gathering. Despite opposition coming in the way, our works for development are going on he claimed. The opposition makes deliberate attempts to stall the works, he charged. We are committed to developing the state as a role model through several welfare schemes, the TRS boss said.

The Chief Minister said that he is immensely pleased to invite senior politicians like Peddi Reddy and others who joined the TRS recently. With these leaders the party will strengthen at all levels and take the welfare schemes to the deserving poor sections, KCR said.

Peddi Reddy came from the Huzurabad segment along with his followers and joined the TRS. He is likely to get a top post in the party or to be fielded in Huzurabad by-poll fray from the TRS.

Peddi Reddy resigned to the BJP recently as Etala Rajender was shunted out of the ministerial post on land grabbing charges and joined the saffron party.

The TRS party leadership is eyeing to win the Huzurabad segment after Etala Rajender quit the post and the seat became vacant later. The TRS won the hearts of the people and will win any polls including Huzurabad or others, KCR said.

Chief Minister announced another major initiative ‘Chenetha Bandhu’ – for the welfare of weavers’ community in the State. “This scheme aimed at economic empowerment of the weavers in the State will be launched soon once the modalities of implementation are finalized, The Chief Minister informed that they took pains to implement welfare schemes for the cause of the poor. We took a decision to implement Dalit Bandhu for Dalit empowerment he said. Earlier we made exercises to come up with schemes like — Rythu Bandhu, Rythu Bhima, pensions, and others, he claimed.

The Chief Minister said that other states are appreciating our schemes including Kalyana Lakshmi, Shadi Mubarak, KCR Kits, and several others.

They are all reaching the poor and weaker sections and efforts are fruitful, the chief minister said. Our aim is to develop the state and give fruits to the poor and deserving sections, KCR said.