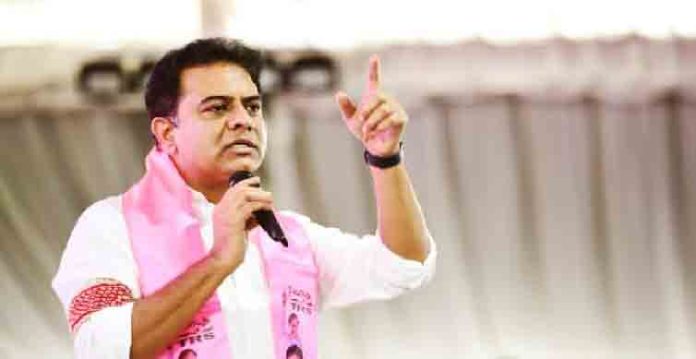 Municipal Administration and IT Minister KT Rama Rao today condemned the attack by BJP Corporators in the GHMC office yesterday.

Taking to Twitter the minister expressed serious displeasure and surprise at the incident. He instructed the Commissioner of Police of Hyderabad Anjani Kumar to take stern action against those involved in the attack at the GHMC office.

Taking to Twitter he condemned the incident as unfortunate. To avoid such incidents in the future the CP should initiate immediate action, the minister said in his Twitter account. Some thugs and hooligans of the BJP in Hyderabad vandalized the GHMC office yesterday.

I strongly condemn this atrocious behavior, he said. The minister made some serious observations against the incident caused by the BJP corporators. KT Rama Rao said that – Guess it is too much to ask Godse Bhakts to behave in a Gandhian manner.

He requested the CP to take the strictest action on the vandals as per law. A team of BJP corporators attacked the destroyed the furniture in the mayor’s office when she was not there. They demanded that the mayor address their issues on development. The BJP leaders and supporters have alleged that they are not getting funds on par with other TRS members in the GHMC.

The GHMC Mayor G Vijaya Lakshmi expressed surprise at the attack by the BJP corporators. She slammed the BJP for such an atrocious act and warned of serious action.

The mayor said that she is ready to address any issues on development being sought by the BJP or other corporators. The GHMC could not give funds for development programs due to the existence of poll code, she added.

She asked the corporators to behave in a manner and not to do such atrocious acts. The people will not pardon the elected representatives if they indulge in such attacks on the offices, she lamented.