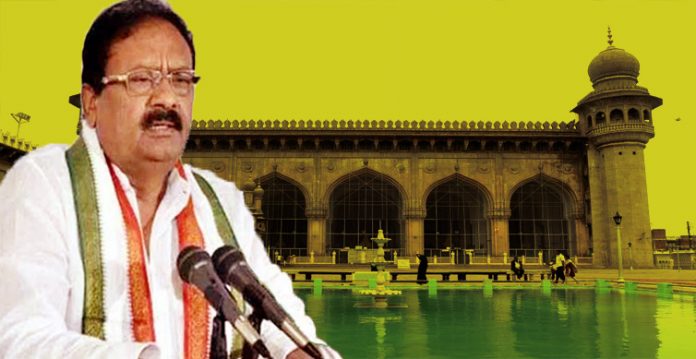 Former Minister Mohammed Ali Shabbir has strongly condemned the decision of the TRS Government of converting regular employees of Mecca Masjid and Royal Mosque to outsourcing staff and demanded that the orders be withdrawn immediately.

“The Minorities Welfare Department has issued a circular converting the regular jobs of as many as 30 employees of two historic mosques – Mecca Masjid and Royal Mosque, Public Gardens into ‘outsourcing’ or ‘contract’ with effect from March 31, 2021. This circular has created unrest among employees, their families, and common Muslims, in general. This circular should be withdrawn immediately,” he demanded in an open letter to Chief Minister K. Chandrashekhar Rao on Sunday.

Shabbir alleged that the TRS Government was doing utter injustice with the employees of both the historic mosques who have rendered selfless service for the last so many years for the upkeep and maintenance of Mecca Masjid and Royal Masjid, Public Gardens. “It is atrocious to link their services with a private agency so as to deprive them good salaries and other benefits,” he said.

“The State Government has recently announced a fitment of 30% for employees and also extended their retirement age to 61 years. But the attitude of your government towards the employees of Mecca Masjid and Royal Mosque clearly shows that you are treating them as a burden on the State’s exchequer. You repeatedly claim that your government treats all religions and religious places equally.

Therefore, you must prove this with your actions and not by mere words. The State Government has drafted service rules for the employees of all major temples and they get salaries and other benefits on par with other government employees. However, the State Government did nothing for the employees of both the historic mosques and now it was turning their regular service into ‘outsourced’ mode. Their HRAs and DAs to have been stopped,” he said.

Shabbir Ali pointed out that the Khateeb, Imam, and Maozan were highly respectable positions and it would be an insult for them and also the entire community if the State Government treats them as ‘outsourced’ employees. “The employees of both the mosques can retire at the age of 65 years. They also get 15 days’ leave and Rs. 3 lakh at the time of retirement. Once they are ‘outsourced’, they will be deprived of all these benefits,” he said.

While stating that the circular is withdrawn immediately, Shabbir Ali demanded that all the employees of Mecca Masjid and Royal Mosque are made permanent. “They should also be given a hike in their salaries and other benefits as presently they get only Rs. 12,000 to Rs. 17,000 per month, which is less than the salary of Home Guards. I also request you to kindly take measures to recruit additional staff as the workforce has remained unchanged since 1976,” he demanded.