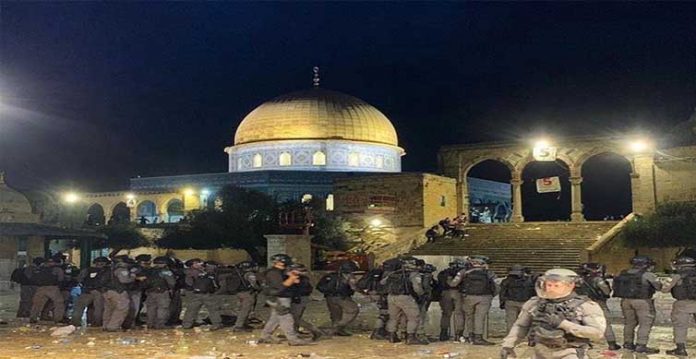 On the final Friday of Ramadan, tens of thousands of Palestinian worshippers packed into the mosque to protest against the Palestinians being evicted from their homes in Israeli-occupied land. Following this, the Israeli police stormed the mosque leading to178 Palestinians injured. And 88 Palestinians hospitalised.

US Condemns Violence in Jerusalem

In the past week, residents of Sheikh Jarrah and the Palestinian have attended nightly vigils to support the families who were being forced for displacement. As the Palestinians gathered at the Al-Aqsa Mosque, the Israeli police stormed the venue and dispersed the worshippers.

The police and the forces attacked the worshippers with skunk water, tear gas, shock Grenada and rubber-coated bullets. At the same time, dozens of Palestinians have been arrested.

After the incident, the US State Department said that they are extremely concerned about the Violence that has taken place in Jerusalem. They have also asked the officials to act decisively. Ned Price, the department’s spokesperson took to social media to release the statement. He said that there is no excuse for violence but bloodshed like this is disturbing especially in the last days of Ramadan.

UN Urges Israel To Call Off Evictions In East Jerusalem

The United Nations has urged the Israel officials to call off any forced eviction in East Jerusalem (Israeli-annexed). They have warned that this would lead to “war crimes”. Rupert Colville spoke to the media in Geneva and said that they wish to emphasize that the East Jerusalem is a part of the occupied Palestinian terriroty. And on this matter, International Humanitarian Law applies.

He said that the occupying power cannot confiscate private property within the boundaries of an occupied territory. Further stating that the transferring of civilian population into the occupied territory was illegal and comes under international law.

Iran’s Supreme Leader Ayatollah Ali Khamenei in a television address called for continuing the armed resistance in the Palestinian territories. And has further urged the Muslim nations to support the same. He said that the downward and declining movement of the Zionist regime has started and will not stop. This comes on Jerusalem Day which is a national holiday and features anti-Israel protests and speeches by the Iranian leaders.

Situation To Get Worse In The Coming Days

At the same time, Palestinian President Mahmud Abbas has held the Israeli government responsible for the recent incidents in Jerusalem and the repercussions from the same. He has urged the UN Security Council to conduct an emergency meeting to protect the Palestinians.