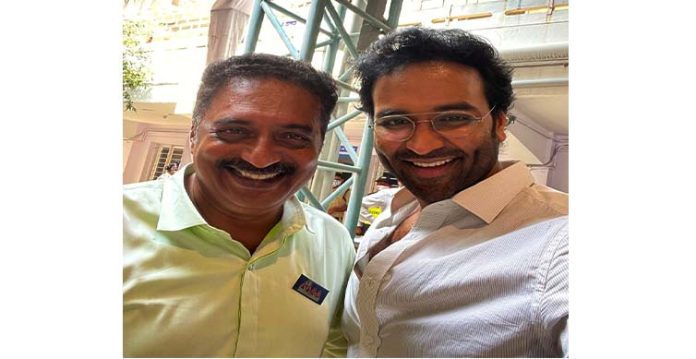 Megastar Chiranjeevi, as well as leading actors Pawan Kalyan, Balakrishna and Nagarjuna, were among the notable Tollywood personalities who cast their votes on Sunday to elect new office-bearers of the Movie Artists Association (MAA), the apex body of the Telugu film industry.

The counting of votes will be taken up at 4 p.m. and is likely to continue till 8 p.m., when the results are slated to be declared.

Retired employees of the Telangana Cooperative Society made elaborate arrangements for the polling in adherence with Covid-19 protocols. As many as 50 policemen and women were deployed as part of the security measures.

After a bitter campaign between the panels led by acclaimed actor Prakash Raj and actor-producer Manchu Vishnu, scenes of camaraderie were witnessed on the polling day. The two contenders battling for the post of MAA president shook hands and embraced each other to declare that they are all one.

Prakash Raj also shook hands with Mohan Babu, who’s also Vishnu’s father, and took his blessings. Mohan Babu had arrived early at the polling booth to bless his son and claimed that the panel enjoyed support of majority of voters.

Megastar and MAA founding president Chiranjeevi said he had cast his vote as per his conscience. He said that whenever the MAA elections were held, the same acrimony was witnessed and called for putting an end to it.

Actor-politician Pawan Kalyan was one of the first to cast his votes. Talking to reporters, the Jana Sena president declined to name the panel he votes for saying this would amount to influencing voters. He said MAA elections would have no bearing on the friendship between his brother Chiranjeevi and Mohan Babu. Pawan said the film industry will not split due to MAA polls.

Chiranjeevi’s brother Naga Babu told reporters that he cast his vote for the Prakash Raj panel. Leading actor Balakrishna said after casting his vote that Prakash Raj and Vishnu were like brothers to him. The actor and politician, who had earlier declared his support for Vishnu, said he voted for those who would work better.

Senior actress and former MP Jaya Prada also cast her vote. Mohan Babu said she flew in from Delhi at his request to participate in the voting.

Genelia D’Souza, who had been staying away from Telugu films following her marriage to Bollywood actor Ritesh Deshmukh, also came to Hyderabad to cast her vote. She said MAA will soon have a “super president”.

There was mild tension at the polling booth when the Vishnu panel members alleged that the opposite side was campaigning inside the booth. Shiva Balaji tried to stop a member of the Prakash Raj panel who was allegedly giving away dummy ballots to voters. There was a heated argument between the two groups. Temperatures came down after police intervention.

Mohan Babu also took exception to the Prakash Raj panel campaigning inside the booth. He urged voters to leave in five minutes after exercising their franchise. There was also a heated argument between Shiva Balaji and Hema.