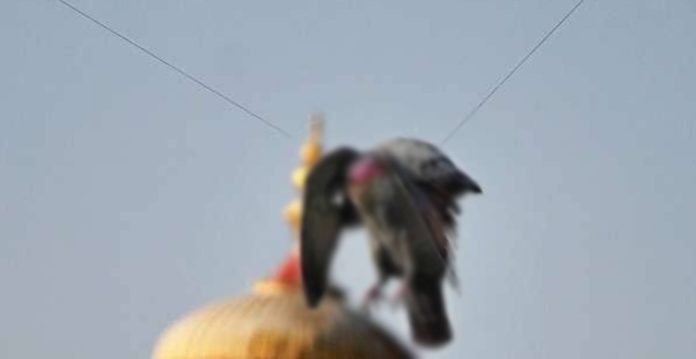 The Telangana Forest Department has taken various measures to implement the ban on use of nylon/synthetic thread in kite-flying during Sankranti festival.

The department has constituted mobile squads to check sale and purchase of ‘manjha’ or Chinese ‘manjha’ as nylon/synthetic threat is popularly called.

The department is mainly focusing on twin cities of Hyderabad and Secunderabad and surroundings where many people, especially youngsters take to kite flying during Sankranti festival.

Similar mobile parties have been formed in the districts by the district forest officers to implement the ban orders.

The state government had issued orders in 2016 imposing total ban on ‘manjha to save birds as well as for the safety of humans.

The Environment, Forests, Science and Technology Department had issued orders imposing a ban on procuring, stocking, sale and use of ‘manjha’.

The action was taken as its use is causing grievous injury to human beings and birds and causing problems for transmission lines and other communication devices and traffic movement. Such material is also causing adverse effects on soil, waterways due to its non-biodegradable nature.

The National Green Tribunal on July 11, 2017 imposed a total ban on use of nylon/synthetic thread in kite flying during Sankranti all over the country.

To create awareness among the people and also shop keepers selling kites and ‘manjha’, posters have been brought out by the Forest Department in English, Telugu and Urdu languages informing about the ban orders and requesting not to sell or purchase it.

According to Forest Department officials, due to the sustained efforts in implementing the ban since 2016, the sales and use of the banned manja has been coming down. There is now more awareness among the sellers as well as buyers.

The department with the help of NGOs and volunteers is ensuring display of posters in the shops to create awareness about the harm caused by these banned substances on animals, birds, humans, and environment.

Apart from the Forest Department, the Police Department, Greater Hyderabad Municipal Corporation (GHMC) officials, and NGOs are also working to implement the ban orders. Overall the impact of awareness among the general public against use of the synthetic ‘manjha’ is positive, the forest officials said.

The Forest Department has also set up 24 x7 helpline with toll free number 18004255364 and land 040-23231440. Any complaints regarding sale or purchase of the banned ‘manjha’ can be registered on these numbers